The 1986 Fleer sticker insert accompanies the popular base set, including a small selection (11) of the best players from the collection. Each one went on to become a Hall of Famer, including the likes of Larry Bird and Magic Johnson. Of course, it’s best known for the Michael Jordan rookie, which is accompanied by several stars seen in their important Rookie Card appearances.

A reasonably simple design sees a yellow tab on the left used for the player name, team, and a small Fleer logo. Action shots are used for all 11 stickers, and they were found at a rate of one per pack.

We’ve looked at everything including values, popularity, and scarcity when putting together this list with the best 1986 Fleer Stickers ever.

A two-time NBA champion and one of the best small guards in basketball history, Isaiah Thomas is the first Hall of Famer to make the list. (He led the Pistons to consecutive championships in 1989 and 1990 and was named MVP of the Finals in 1990.)

Thomas’ 1986 Fleer sticker is one of the rarer options from the set if you’re looking for pristine copies. There are only 40 PSA 10 graded versions, with one for $4,284 most recently.

Knicks legend Patrick Ewing was one of the dominant stars of his era, as an eleven-time all-star named to seven All-NBA teams. His rookie sticker from the 1986 Fleer set is reasonably affordable, unless you’re looking at PSA 10 graded versions. There are 76 Gem Mint copies, with the last sale for a flat $4,150.

Lew Alcindor (Kareem Abdul-Jabbar) was so good that the NCAA prohibited the dunk before the 1967-1968 collegiate season, arguably due to his dominating displays. He responded by perfecting the skyhook shot, which was almost unstoppable.

A six-time NBA Most Valuable Player, he helped the Los Angeles Lakers to win numerous titles, and moved into social activism, fighting for racial and religious equality and diversity since his retirement.

By 1986, Abdul-Jabbar was nearing the tail-end of his career, as the Lakers got to the NBA Finals in each of his final three seasons. Elusive PSA 10 copies of his Fleer sticker are valued at just under $19,000.

Hall of Famer Hakeem Olajuwon is a 12-time All-Star and two-time NBA Champion and Finals MVP. His rookie sticker is next to make the list.

Olajuwon is shown in a dominant action shot, while his name is found (Akeem) on a yellow tab on the left hand side. It’s worth noting that Olajuwon changed the spelling of his name from Akeem to Hakeem in 1991.

Unpeeled pristine versions are where the true value lies, and there are only 61 PSA 10 copies at the current time of writing. They sell for roughly $4,500.

Was it ever going to be anyone other than Michael Jordan?

Any piece of Michael Jordan merch released during his playing career is likely to sell for a large sum if it has been graded by the likes of PSA or BGS. This is especially true when looking at his 1986-87 rookie cards.

The 1986 Fleer sticker is a viable option for fans who are looking for a cheaper Jordan RC.

There aren’t many collectors who would prefer a sticker over a card, so it plays second fiddle to the sturdier alternative. However, it began to gain popularity as the price of the Fleer card rose rapidly, even if it’s a slightly less prestigious option. There are 122 Gem Mint copies at the current time of writing, with the last sale recorded at $69,000. (Nice.) 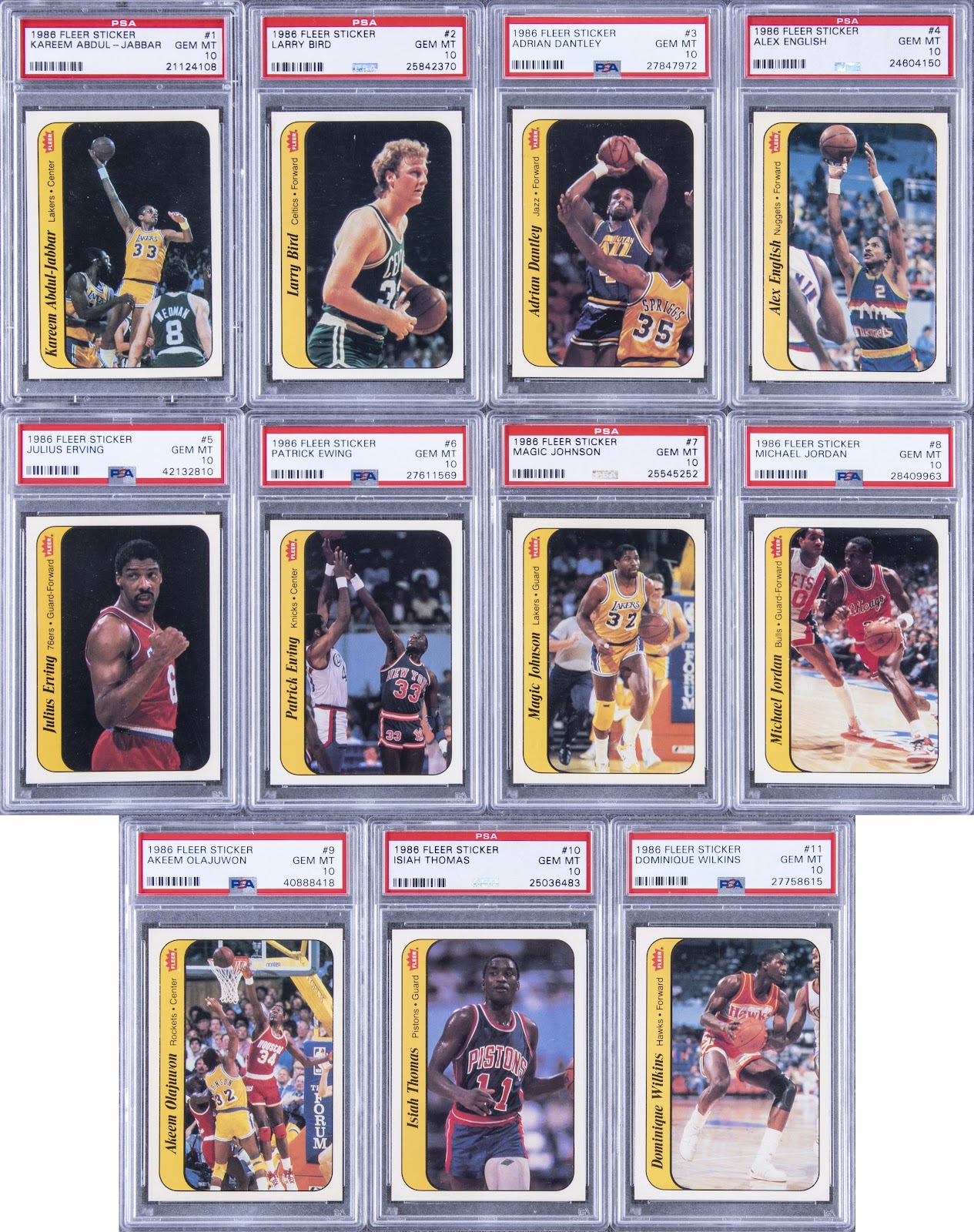 Here’s a complete checklist for the 1986 Fleer Basketball sticker set:

What do we think of the current market for the best ever 1986 Fleer stickers?

Anything aside from the 1986 Fleer Jordan RC sticker should be attainable, even with a smaller budget. Given the tiny checklist, it shouldn’t be difficult to complete the collection. (Once again, this is a more affordable option compared to the 1986 Fleer card set.)

Without a shadow of a doubt, it has to be the 1986 Fleer Sticker Basketball Michael Jordan RC. You’re never going to beat MJ23 in terms of values and interest, so this is our pick as the best investment option overall.

The 1986 Fleer sticker set is always going to sell for a premium, thanks to the Jordan RC, as well as the famous red white and blue base collection. It’s also packed with a strong selection of players to choose from.

Then there’s the fact that it’s a flimsy sticker that was released almost 40 years ago. Pristine copies will now sell for four figures, which makes sense as PSA notes:

“Stickers are fraught with centering issues which makes them difficult to find in high grades.”

You can’t go wrong with a Jordan rookie, even if it is of the stickered variety.